Stories From the Fringe at the Museum of Tolerance

CAROLINE AARON (Actor—Rabbis Near-Retirement) is an accomplished actor in film, television and stage. Directors such as Woody Allen, Mike Nichols, Robert Altman, Nora Ephron, Paul Mazursky, Don Roos, and many others keep her in demand. Her work with Nichols includes: on Broadway in Social Security, and in films such as Heartburn (opposite Meryl Streep), Working Girl, Primary Colors, and What Planet Are You From? Film audiences perhaps best know her as Woody Allen’s sister in “Crimes and Misdemeanors”, but she has worked with Allen in Alice, Bullets Over Broadway, Husbands and Wives, and Deconstructing Harry. She has guest starred on Desperate Housewives, Brothers and Sisters, Shark, Sex and The City, Curb Your Enthusiasm, and Six Feet Under, among others. She is the recipient of a Helen Hayes and Dramalogue Award.

EVE BRANDSTEIN (Director/Producer), one of Hollywood’s most prodigious workers, has made contributions to nearly every facet of the entertainment industry. She has been a major studio executive, a producer, a director, writer/creator, casting director, talent manager and author. Brandstein was casting executive for Norman Lear’s production companies. Some of her credits for casting over two decades include, Diff’rent Strokes, One Day At A Time, Facts of Life and Who’s The Boss. She is producing and directing two documentaries – The Girl In the Room, stories from women in the comedy world and Maybe You’ll Find Something There, a Second Generation Holocaust Survivor’s journey back to her family’s life in the Carpathian Mountains. She also is producing Poetry In Motion: LA Monthly at Beyond Baroque and the Beat Era poetry theater show, Waiting For Jack. Eve is a poet, journalist, artist, licensed psychotherapist and a proud board member of Jewish Women’s Theater.

SHIRA FOX (Vocals) is the daughter of two Los Angeles cantors. Shira has served as Cantor of Temple Rodeph Shalom and at Temple Beth El. Her theatrical credits include lead roles in Lil Abner and Joseph’s Amazing Technicolor Dreamcoat. She is an alumnus of Brandeis University, and currently acts as B’nai Mitzvah Teacher and Program Coordinator at Kehillat Israel Reconstructionist Congregation.

ABBY FREEMAN (Actor—Rabbis Recently-Ordained) received her BFA from the Tisch School of the Arts at New York University. She is a co-founder of AiRealistic, an aerial theatre company. She has choreographed and performed in New York and Los Angeles, as well as many international cities. She created original work for clients including The LA Philharmonic, Toyota, Johnson & Johnson, General Motors, and Red Bull. Most recently, she performed at the 2008 Beijing Olympics and the 2009 LA Philharmonic Gala. She has completed the first year of her MBA at the Anderson School of Management and plans on continuing to work in Arts Management.

BARI HOCHWALD (Actor— Rabbis Mid-Career) Ms. Hochwald received her BFA in acting from Syracuse University and completed graduate studies at the American Repertory Institute for Advanced Theatre Training at Harvard. She appeared in regional theaters throughout the country. Ms. Hochwald has worked in the development of over 50 new plays as actress and director, and was nominated and awarded for her performances with The Drama Critics Circle Award, The Garland Awards, the Maddy Awards and the L.A. Weekly Awards. Ms. Hochwald has guest starred on many television productions such as C.S.I and Desperate Housewives. In Italy she founded Florence International Theatre Company, which she ran for 4 seasons in Florence, Italy. She is currently President and Artistic Director of The Global Theatre Project. Her latest directing project, The Men of Mah Jongg just closed at Theatre 40 in Beverly Hills.

RABBI LYNNE A. KERN (Playwright/Producer) is a Pulitzer Prize-winning journalist, poet and writer whose work has been published in magazines, newspapers, and anthologies worldwide. She teaches classes for women in synagogues and is currently working on a Jewish Memoir. As a pulpit rabbi, she created innovative women’s programming focused on excavating the women’s voice in Torah, and the creation of ritual and spiritual writing. Currently, she is working on a documentary about women rabbis. She is also a Founding Board Member of the Jewish Women’s Theatre.

STEPHEN MACHT (Actor, All Male Roles) Trained professionally at the London Academy of Music and Dramatic Arts, a graduate of Dartmouth College, a Ph.D. in Dramatic Literature from Indiana University and during his teaching days, a tenured Associate Professor, Stephen is one of the best-educated working actors in America today. He has played leading men in plays and dozens of television movies and feature films, RAID ON ENTEBBE, GRAVEYARD SHIFT, THE IMMIGRANTS to name a few. On t.v. he was Sharon Gless’ love interest in CAGNEY AND LACEY and has recurred on BOSTON PUBLIC, JACK AND JILL and BOOMTOWN. Soap Opera Digest nominated Stephen “2007 Villain of The Year.” On stage, he starred opposite Charlton Heston in a “Man for All Seasons” and “Cain Mutiny Court Martial,” and last year Stephen starred opposite Sharon Gless in a new play entitled “A Round Heeled Woman,” about the novelist, Jane Juska’s late-life adventures in sex and romance! Stephen and his wife, Suzanne, have four children as well as eight grandchildren and counting. His philanthropic work includes The Parkinson’s Resource Organization, The Jewish National Fund, and The Center For Jewish Culture and Creativity. He is a second year chaplaincy student at the Academy for the Jewish Religion in Los Angeles, Ca., and hopefully, he will continue daily to fulfill as many of the 613 mitzvoth as possible! Appearing in STORIES FROM THE FRINGE is certainly one of them.

LARAINE NEWMAN (Actor—Rabbis Near-Retirement) is a native of Los Angeles and began her career at the age of 15 as part of an improv group hired to perform in the parks of South Central LA. She went on to study mime with Marcel Marceau in Paris and, at the age of 19, appeared in the New Theatre For Now at the Mark Taper. Laraine and her sister, Tracy, were among the founding members of The Groundlings. In 1973 she appeared in a Lily Tomlin special produced by Lorne Michaels, who later hired her to be in the first cast of Saturday Night Live. Laraine has worked for directors ranging from Woody Allan to Rob Zombie. Her more notable movie roles have been Problem Child 2, Stardust Memories, American Hot Wax and Perfect. Laraine’s most recent Television appearances include: Entourage, Brothers and Sisters, Curb Your Enthusiasm, Friends, According to Jim, and 7th Heaven. Laraine has enjoyed a thriving animation career and can be heard in such current series as: Metalocalypse, Fairly Odd Parents, Sponge Bob Square Pants, Batman and Superman. Her animated features include: Toy Story 3, Cloudy With A Chance of Meatballs, Up, Wall-E, Cars, Monsters Inc. and Horton Hears A Who. She has written for the LA Times Magazine, The Huffington Post, The Believer, McSweeney’s, Esquire and is a contributing editor for Oneforthetable; an online food magazine. Laraine lives in Los Angeles with her husband of 21 years and her two teenage daughters.

KATE SCHLESINGER (Associate Producer) is founder and principal of “The Balancing Act,” a marketing, management and project management firm geared to small businesses and private individuals. She has a MBA in Non-Profit Management and Marketing from UCLA’s Anderson School of Business. Before earning her master’s degree, Kate worked as a photography editor, curator and researcher.

RONDA SPINAK (Playwright/Producer) is a writer and producer. She conceived of, created and produced At-Homes Salon Theatre in Los Angeles to sold-out audiences. She holds a MBA from UCLA, a Masters in Professional Writing from USC and two degrees from Stanford. She has written for the Emmy Award-winning children’s show, Rugrats, authored the critically acclaimed nonfiction book ProBodX: Proper Body Exercise (HarperCollins, publisher), and written many plays, including festival favorite winner Oscar Wilde’s Wife. She is currently producing a documentary film about LA women rabbis. She co-founded Jewish Women’s Theatre and serves as its Producing Artistic Director.

ANDREA WAGNER (Co-Producer) has worked in non-profit for 25 years and was instrumental in the creation of the Jewish Women’s Theatre. She holds a Bachelor’s and Master’s Degree in Theatre Arts and has taught theatre on both the high school and college level. As a member of several community theater groups throughout California, she directed plays, designed costumes and envisioned sets. She has been active in the Jewish community and currently sits on the advisory boards of several community colleges and extension programs. She has extensive non-profit experience having worked professionally in the Jewish community with Jewish Vocational Services and the Anti-Defamation League.

RONNIE YESKEL (Casting Director) began her career in the entertainment industry in Washington D.C. working at The Folger Theatre, making shoes, boots and brass armor from scratch for Richard III. While studying acting in D.C., she worked in theater production, from props to associate producer. She staged-managed a play in D.C. that took her to New York City. Her first assistant positions in the world of casting were with Joy Todd and Bonnie Timmermann, before she went out on her own. After years of casting theatre in NYC, Ronnie made her way to LA where she became the casting director for the LA THEATRE CENTER. Some of her favorite film and TV projects have included The Marrying Man, Pulp Fiction, Reservoir Dogs, L.A.Law, Waking the Dead, Bread and Roses, Hope Floats, Igby Goes Down, Curb Your Enthusiasm, Threshold. Ronnie is currently working on a number of projects including Zen Dog with directors Gillian Armstrong and W.H. Macy. She has three features coming out. What Ronnie is most proud of, however, is her daughter, Emily.

KATE ZENTALL (Actor—Rabbis Near-Retirement) has appeared at the Public Theater and Carnegie Hall in NYC, and at the Mark Taper in LA, among many other venues, and has also been seen in numerous TV series, MOWs, and films. She is now a writer and editor for the Internet, magazines, and books.

Stories From the Fringe: Women Rabbis, Revealed! is a commission of Jewish Women’s Theatre and was first presented in the At-Homes May Salon, 2010.

The play is set today, and yesterday, in real time and in memory. All words have been culled from transcripts of extensive interviews from 18 Los Angeles women rabbis, and are spoken nearly verbatim.

Thank you to the eighteen Los Angeles rabbis who shared their lives with us and invited us into their hearts: 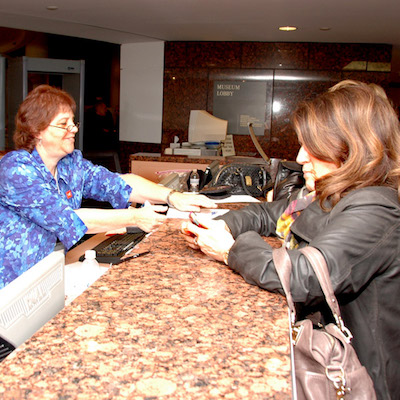 A subscriber checks in at the MoT front desk 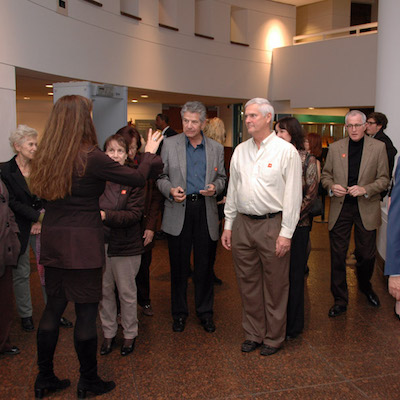 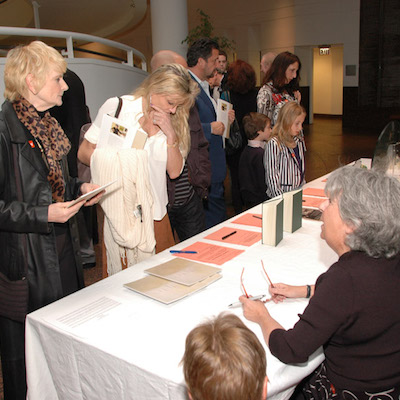 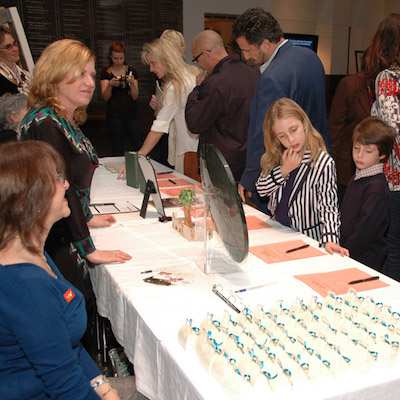 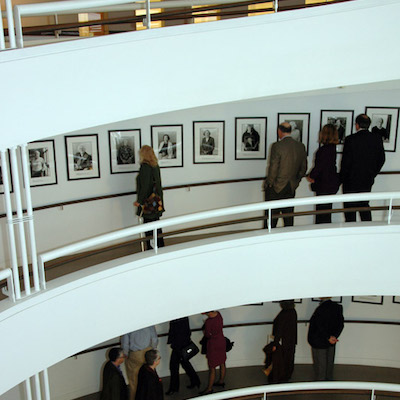 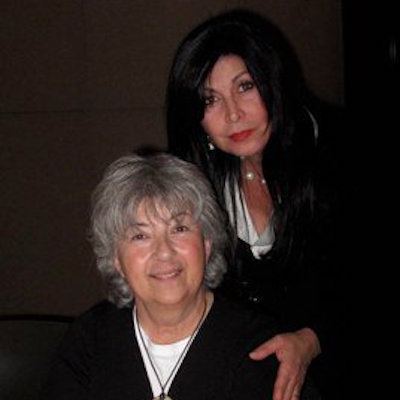 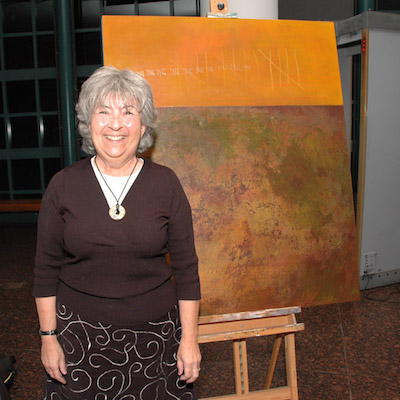 Doni Silver Simons in front of her JWT painting 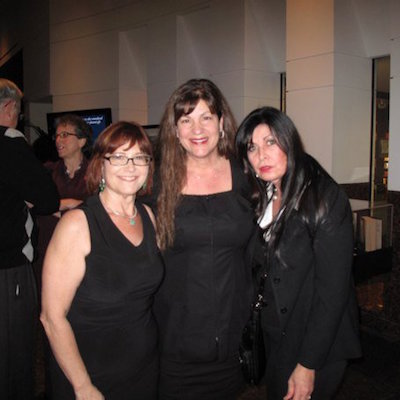 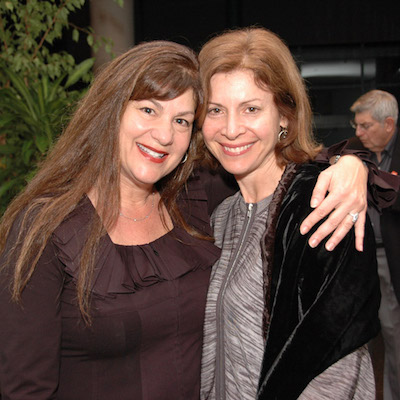 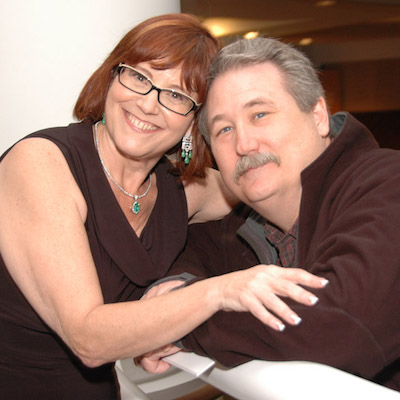 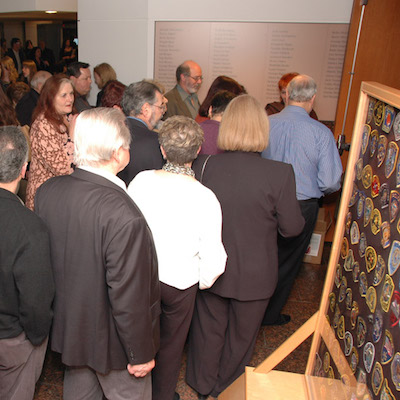 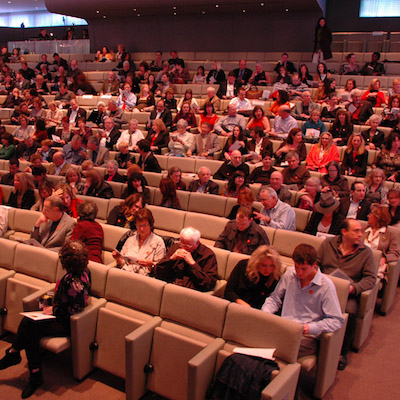 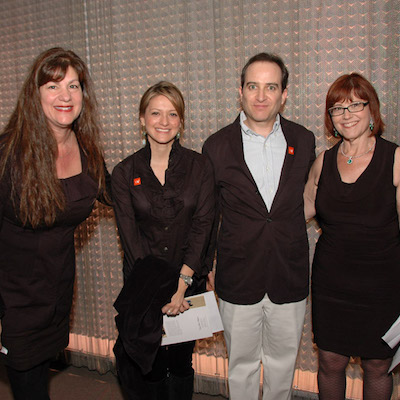 Writers with Israeli Deputy Consul Gil Artzyeli and his wife 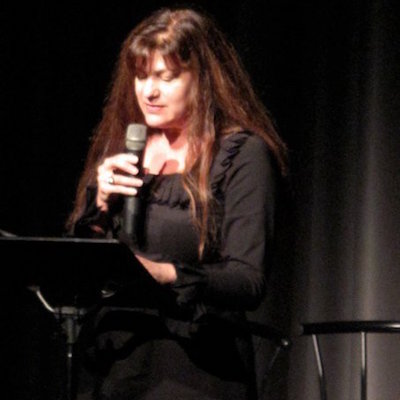 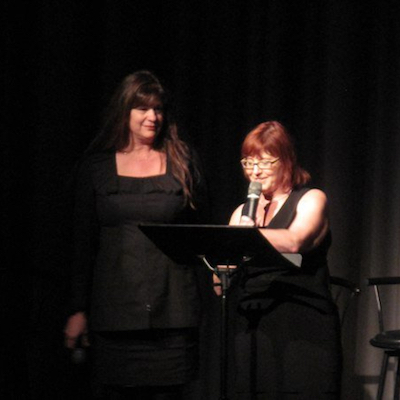 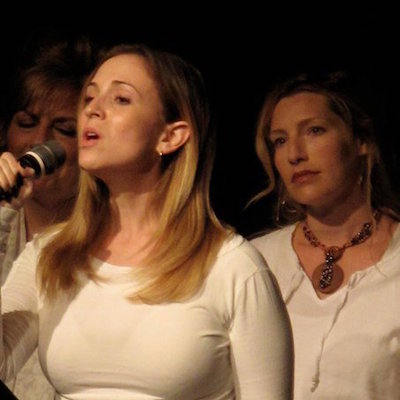