Caught between the American Dream and the Promised Land.  Stories of Israelis in America as they define themselves.
March 6-23, 2022 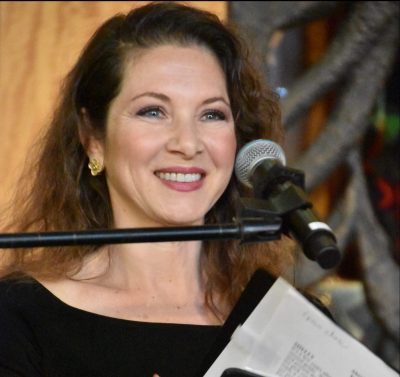 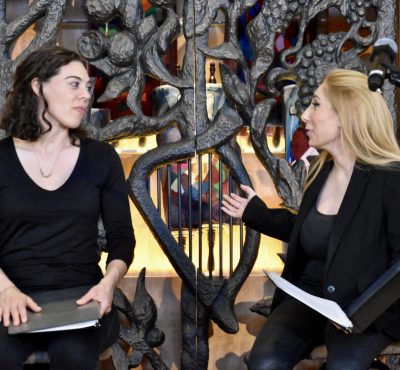 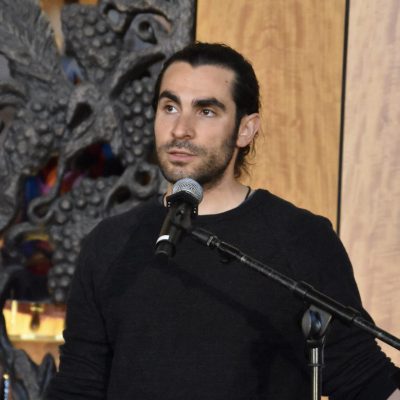 Jewish Journal
The Old South Meets an Even Older Tradition

Hatikvah
Recorded by the Israel Philharmonic Orchestra. Performed by ensemble.

A Precise Woman
Written by Yehuda Amichai and translated by Chana Bloch. Performed by Jordan Bielsky.

The Bridge of Her Nose
Written by Christine Benvenuto. Performed by Meitar Paz and Roni Geva or Rosie Moss.

You Are One of Us
Written by Michael Kagan. Performed by Jordan Bielsky and Lisa Ann Grant.

My People For Me
Written by Ayelet Zandberg Sason. Performed by Meitar Paz.

Where I Draw the Line
Written by Sharon Landau. Performed by Roni Geva or Rosie Moss, Meitar Paz, and Jordan Bielsky.

Reclaiming What Was Lost
Written by Rabbi Tamara Cohn Eskenazi, Ph.D.
Adapted by Ronda Spinak from an interview. Performed by Lisa Ann Grant.

What I Was Missing
Written by Dikla Kadosh. Performed by Roni Geva or Rosie Moss and ensemble.

Advice to a Young Israeli
Written by Yael Kagan. Performed by Meitar Paz.

Proud to Be
Written by Sivan Kobi. Adapted by David Chiu from an interview. Performed by Lisa Ann Grant.

Where is Home
Written by Lori Levy. Performed by ensemble.

YEHUDA AMICHAI (Writer) and CHANA BLOCH (Translator). Yehuda Amichai (of blessed memory) is recognized as one of Israel’s greatest poets and one of the first to write in colloquial Hebrew. His poems have been translated into 40 languages and he was nominated several times for the Nobel Prize in literature. He was a visiting professor at UC Berkeley in 1971, and a poet-in-residence at New York University in 1987. His poem “A Precise Woman” was translated by Chana Bloch (of blessed memory), an American poet, translator, and scholar. She taught at Mills College in Oakland, California for over thirty years and directed their Creative Writing program.

LIZ ALTMAN (South Bay Producer) wrote “Almost a Sacrifice,” previously performed at The Braid salon Unknown Stories of Biblical Proportions. Other credits include song lyrics for activities at the University of Michigan and the Dallas Bar Follies; and co-directing, co-writing, and performing in the annual SMU law school follies. The Braid: Advisory board member and South Bay producer. Professional: vice president of a real estate company. Hobbies: tennis, art, and travel. Spe- cial love to her muse, Louis.

CHRISTINE BENVENUTO (Writer) is the author of two works of nonfiction, Shiksa and Sex Changes, published by St. Martin’s Press, and her short stories, essays, articles, and reviews have appeared in many newspapers and magazines. A version of The Bridge of Her Nose is forthcoming in an anthology from Michigan State University, and another version forms the first act of a play called Bridges, which received a series of staged readings at the LAVA Center in Massachusetts. Her short plays have been produced for the Boston Theater Marathon and online platforms, and one is forthcoming in an international, multilingual anthology to be published in London.

JORDAN BIELSKY (Actor), from Rockaway Beach, New York City, cut his teeth working on Tennessee Williams and John Patrick Shanley plays before moving to Los Angeles. He has since been in numerous films and television shows, most recently as a Krav Maga instructor in Get Shorty on EPIX. You’ve probably heard his voice in any number of Netflix projects, including Fauda and Money Heist. Most days, you can catch him walking around Los Feliz with his dog, Moxie, mutter- ing to himself about the latest screenplay he is working on, the latest property he’s considering investing in, and on how to fix systemic societal issues as an artist and entrepreneur. Jordan is grateful for his breath, and to be here sharing time and space with you all.

DAVID CHIU (Dramaturge & Marketing/Communications) is a West LA–based screenwriter whose journey with The Braid began when a story of his was performed in True Colors. He went on to become a two-time NEXT at The Braid Emerging Artists fellow and finally joined this incredible story company as an employee. Television: LORE (Amazon Prime). The Braid: StoryNosh (Producer, Sound), True Colors (Writer), Inside Our Time (Writer), For Goodness Sake (Writer, Director), I Am a Jew (Writer), The Rest is History (Writer, Director, Literary). Represented by The Gersh Agency and Authentic Talent & Literary Management. Member of the Board of Trustees at Temple Isaiah of Los Angeles; recipient of its 2019 Emerging Leader Award. Environmental activist and volunteer on various electoral campaigns. Jew of Color, of Litvak and Cantonese heritage. SoCal event facilitator for LUNAR: The Asian-Jewish Film Project.

RINA COHEN (Writer) is from a Sephardic family in Jerusalem and grew up speaking Ladino. She met her Ashkenazi husband while serving in the IDF, and together they moved to Los Angeles with their two young girls in the 1970s and had a son born in the United States. Rina worked at Emek Hebrew Academy and Valley Beth Shalom Day School for many years. Today she takes pride in being the best safta to seven grandchildren and bringing her family together for Shabbat dinners and everyday occasions.

SHELLY COHEN (Writer) was born in Israel and moved to the US at the ripe age of three. She grew up in Los Angeles, and after almost 20 years away living in Urbana, Illinois, and Brooklyn, NY, she recently moved back to the LA sun with her partner and two kids. She is a reproductive psychiatrist helping pregnant and post-partum women in NY and CA. She loves spending time with her family, running, writing, and staring at the ocean.

RABBI TAMARA COHN ESKENAZI , Ph.D. (Writer) serves as the Effie Wise Ochs professor of biblical literature and history at Hebrew Union College-Jewish Institute of Religion’s Los Angeles campus and was the first woman appointed as professor to the rabbinical faculty of HUC-JIR. Rabbi Eskenazi is the editor of the award-winning book The Torah: A Women’s Commentary (with Rabbi Andrea Weiss, Ph.D.), a unique commentary with contributions from hundreds of women scholars, clergy, and poets, bringing the voices and visions of women to the interpretation of the Torah in the 21st century. Rabbi Eskenazi has served on the executive committee of the Society of Biblical Literature and as president of its Pacific Coast region. She has authored numerous articles and several books, including an award-winning commentary on Ruth (JPS), and has lectured at numerous conferences throughout the world—in Jerusalem, Berlin, Paris, Vienna, and Rome, among other cities—and in synagogues and churches in the United States.

ANDREW FROMER (Assistant Artistic Director) a Los Angeles native, grew up as an active member in the Jewish community through Stephen Wise Temple. He attended Windward School in Mar Vista, where his career as an actor began in the school plays and musicals. After completing his BFA in theater at UC Santa Barbara and an exciting year of living in Israel, Andrew returned to LA for acting and producing. His TV credits include Never Have I Ever (Netflix) and Anger Management (FX); feature film credits include Highway to Havasu (Billy/Producer) and The Sweet Life (Mike/Assistant to Production). Andrew also edits and directs and is excited to be coordinating this year’s iteration of NEXT @ The Braid, The Braid’s Emerging Artists Fellowship. Find out more info at the-braid.org/next.

RONI GEVA (Actor/Writer) is honored to be returning to The Braid. An actor, writer, and producer born and raised in Tel Aviv, Israel, and College Station, Texas, Roni spent much stage time in Chicago, where she was nominated for a Joseph Jefferson Award for best supporting actress in a musical (Urinetown). Other theatre work includes The Clean House, Pride and Prejudice, Love Loss, and What I Wore, Grease, and others. Television/film work includes roles on Atypical, Bosch, This Is Us, Jane the Virgin, and Andi Mack, as well as co-creating the Emmy-nominated comedy CTRL ALT DELETE. Wanna know more? ronigeva.com.

LISA ANN GRANT (Actor) is an Abby Freeman Artist-in-Residence with The Braid. Originally from New York City, Lisa appeared on Broadway as Eponine in Les Miserables, and in various roles in Leader of the Pack, DreamGirls and Camelot. She appeared off-Broadway with Robert Downey Jr. and Jane Krakowski in American Passion, Radio City Music Hall as a soloist, and The Imaginary Invalid at the Laurie Beechman Theater. On television she has appeared on Comedy Central, Disney Junior, Stacked, Charmed, ER, Family Matters, and Crossing Jordan, as well as several commercials and voice-overs, including the animated feature Max and Me. Lisa is currently working on an album of original music and a musical. She considers her daughters, Cara and Natalie, her greatest production.

AMANDA HOROWITZ (Stage Manager) is a Jewish theater artist born and raised in Los Angeles and an Abby Freeman Artist-in-Residence with The Braid. She grew up performing in musicals and plays before turning her attention to behind-the-scenes work. After attending The University of Alabama to earn bachelor’s degrees in math and theater, she returned to LA to work as a stage manager for organizations including The Braid, Theatre Ariel, Young Actor’s Studio, and Bayit Shelanu. She also runs the box office for Echo Theater Company and the Los Angeles Ballet. She’d like to thank The Braid for all of the love and opportunities to work with such wonderful people.

ELDAD (PHIL) ISAAC (Writer) is a man of different names. He was born Eldad (from the Biblical rebels Eldad and Meidad) and in tradition with Israeli very short nicknames, became Eldi in Jerusalem. When his parents said, “We’re going to Montreal,” Eldi became Philip (sometimes Philippe) because no one could pronounce Eldad in the freezing temps of Canada. And then when he arrived in warm Los Angeles with his parents, Philip was way too long and formal and he became Phil. And then Phil became “Epi” and “LD” too. So goes the search for identity in the life of an immigrant Israeli kid in America who got his MA at Columbia, served for nearly two decades as a deputy attorney general in New Jersey and then as deputy general manager for administration and labor relations as well as the ethics officer for New Jersey Transit. Eldi from Jerusalem now lives as retired Phil in Los Angeles and has two fabulous grown daughters, Amital and Ortal. He is a member of Temple Isaiah and has to pinch himself that he was married there by Rabbi Lewis a few decades ago.

DIKLA KADOSH (Writer) was born in Israel and grew up in Los Angeles. Her dream was to be a writer, and her career has taken various twists and turns, each of them giving her the opportunity to tell a story and connect people. She formerly served as senior director for the Israeli American Council’s Shepher Community Center, the first Israeli-American Community Center in the United States. She recently moved back to Israel after 33 years, along with her three children, her significant other, and her ex-husband (which can be the subject of another dramatic performance).

MICHAEL KAGAN (Writer) is a 28-year-old Israeli-American based in San Diego. The son of two Israeli immigrants, Michael has lived all across the United States, but he ultimately settled in Southern California after graduating from San Diego State University in 2017. Michael spent his first five years out of college as a professional in the Jewish nonprofit world before transitioning to a career in risk consulting earlier this year. Michael is fluent in both English and Hebrew and visits Israel on an annual basis.

YAEL KAGAN (Writer) grew up in Jerusalem and has spent the last 30 years living in the United States, mostly in Florida and now in Los Angeles. She is the proud mother of two grown kids, Michael and Odeya, with strong Jewish roots and Israeli identity. She works as a hypnotherapist and NLP practitioner and runs workshops on numerology as a tool for life. She is founder of YAELA by YK, a new women’s apparel design brand launching spring 2022. She is an Israeli and American by passport but will always be an Israeli first.