SHIRA FOX (Singer) grew up as the daughter of two Los Angeles based cantors. Shira has officiated as Cantorial Soloist at synagogues throughout Southern California including Temple Rodeph and Congregation B’nai David. She currently serves as a cantor for Beit T’Shuvah, the leader in the field of faith-based recovery. Her theatrical credits include lead roles in Lil Abner and Joseph’s Amazing Technicolor Dreamcoat. She is an alumnus of SUNY. Before entering into the field of recovery work, Shira held the position of B’nai Mitzvah Teacher and Program Coordinator for Kehillat Israel, a Reconstructionist congregation in the Pacific Palisades. Music sets her free.

AMY HANDELMAN (Actor) hails from the great state of Michigan – Go Green! LA Theatre credits include: Surviving Sex (The Falcon Theater – directed by Susan Morgenstern), The Taming of the Shrew (Shakespeare Center of Los Angeles), Steel Magnolias (The Rubicon Theatre, with Stephanie Zimbalist and Bonnie Franklin), appeared in numerous staged readings with West Hollywood’s The Classical Theatre Lab and various national commercials. Amy is a proud member of SAG-AFTRA, AEA. Thanks to Adam for always making her laugh. www.amyhandelman.com.

ANNIE KORZEN (Writer/Performer) was the recurring Doris Klompus on Seinfeld. She played John Turturro’s mother in Transformers: Revenge of the Fallen, and Jason Alexander’s sister in Neil Simon’s Prisoner of 2nd Avenue. She has performed her solo shows Yenta Unplugged and The Yenta Cometh on three continents. Annie is the author of Bargain Junkie: Living the Good Life on the Cheap. She has done humorous essays for NPR’s Morning Edition, The New York Times, Los Angeles Times, and many more. Roger Ebert suggested on Twitter that you watch Annie on OldJewsTellingJokes.com. Annie has created a full evening of her stories called Tales from the Mouth: Mishaps, Fiascos, and Other Triumphs.

JAMIE LEVINSON (Actor/TD) graduated from Santa Monica High School in 2010. At Allegheny College he acted in two productions, The Cherry Orchard, where he played Yepikhodov, and Servant of Two Masters, where he played Florindo. During his primary education, he appeared in numerous talent shows.

SUSAN MORGENSTERN (Director) has been an actress since the age of five. Susan crossed over into directing when she began staging musical theatre concert readings while co-teaching “American Musical Comedy” with Tom Lehrer at U.C. Santa Cruz. She went on to teach and direct at the renowned Stage Door Manor, a performing arts camp in upstate New York. In Los Angeles, her direction of David Vowell’s The Ascension of Lili at the Two Roads Theatre received critical acclaim. At Theatre West, Susan has directed selections from David Ives’ All in the Timing (TW’s inaugural Youth Theatre musical), Just Too Cool, and the musical, Saturday Night at Grossinger’s. In 2010 at TW, she directed Barbara Nell Beery’s The Socialization of Ruthie Shapiro. At the Falcon Theatre, she has directed Leap, Surviving Sex and Sam Bobrick’s hit comedy, The Psychic. In 2011 Susan directed Happy Days, A New Musical, book by Garry Marshall, music/lyrics by Paul Williams at Cabrillo Music Theatre’s 1,800-seat auditorium. In 2012, she directed a stage reading Ghost-s, A Musical About a Musical at KTC’s INKubator series with the creative team of Kincaid Jones (book), Noelle Donfeld (lyrics) and Brian Woodbury (composer/lyrics). Susan directed JWT’s popular The Moment You Knew in the 4th Season.

MONICA PIPER (Writer/Performer) is an Emmy Award-winning comedy writer and stand up comic. She has written for the sit-coms Roseanne, Mad About You and Veronica’s Closet, and was the head writer of the #1 children’s animated series Rugrats. She starred in her own Showtime Network comedy special, No, Monica, … Just You and was nominated by the American Comedy Awards as one of the top five female comedians in the country. Monica performs for Jewish organizations around the country and is proud to be an artist-in-residence with the acclaimed Jewish Women’s Theatre in Los Angeles.

LETTY COTTIN POGREBIN (Writer) is an award-winning journalist, widely published opinion writer, acclaimed public speaker, admired political activist and author of ten books. Her nonfiction best sellers Getting Over Getting Older, and Deborah, Golda, and Me are memoirs. She has contributed hundreds of articles to a variety of print publications including the New York Times, The Nation, The Washington Post and Harpers Bazaar. She is the co-founder of Ms. Magazine with Gloria Steinem. Letty and her husband live in New York.

LISA ROBINS (Actor) stars and tours with the one-woman show, The Blessing of a Broken Heart, based on Sherri Mandell’s acclaimed book, directed and adapted by Todd Salovey. She starred at the Geffen Playhouse in Nora and Delia Ephron’s Love, Loss and What I Wore and was honored to be directed by Paul Mazursky in Michael Elias’ Catskill Sonata. Additional theatre credits include Tom Baum’s Shock Therapy and Hal Ackerman’s Testosterone, directed by Michael Arabian, Fallujah at Theatre East (Ovation nomination for best new play), Cornerstone’s Long Bridge Over Deep Waters, directed by Bill Rausch at the Ford, and Center of the Star by Yehuda Hyman. Lisa is a lifetime member of the Actors’ Studio. Film/TV includes The Rum Diary opposite Johnny Depp, James Dean directed by Mark Rydell, and Ovation, shot by Henry Jaglom. Lisa is grateful to have appeared in an abundance of JWT salons, and gives thanks to the warm and hard working Ronda Spinak, and all of her wonderful JWT colleagues! Special thanks to Lisa’s finest work of art, her 14-year-old daughter, Renata, who recently became a bat mitzvah(!) and to Rick, Simona and Alec.

LISA PEARL ROSENBAUM (Dramaturge) is the author of the novel, A Day of Small Beginnings (Little, Brown & Co. 2006). When not engaged with all things JWT she works on her new novel about the destruction of ancient Indian mounds at Cahokia, Illinois, the Blacklist, America’s interstate highways and oh yes, love. Lisa lives in Pacific Palisades with her husband, Walt Lipsman. They have two daughters, Ariana and Maya.

RONDA SPINAK (Artistic Director/Producer,Writer) created the At-Homes Salon Theatre Series, now in its sixth season, and has developed and produced 18 original Jewish themed Salon shows. She has written for the Emmy Award-winning children’s show, Rugrats, authored the critically acclaimed nonfiction book ProBodX: Proper Body Exercise (HarperCollins, publisher), and written many plays, including Oscar Wilde’s Wife. She is currently producing the documentary film about women rabbis, On the Fringe, and has co- authored the play, Stories From the Fringe, the personal stories of women rabbis culled from the transcripts of the documentary film. Ronda is grateful for the many blessings she’s received from her work with Jewish Women’s Theatre. She is also thankful to her family for their support, especially Alan Ross, and Curren and Aiden Krasnoff.

SALLY WEBER (Writer) is a licensed clinical social worker. She is recently retired from Jewish Family Service but continues as a consultant to a project bringing together Los Angeles County Department of Mental Health clinicians and interfaith clergy to explore the nexus between spirituality and mental wellness. Much of her introduction to spirituality came from watching her two daughters, Gavi and Adina, begin making sense of the world around them. Her education continues as she views the world through the eyes of her grandchildren.

SUSAN YANKOWITZ (Writer) is a playwight, novelist, librettist and occasional screenwriter. Her play A-Z BOXES won the 2011–2012 award for Best Ensemble Play in Ankara,Turkey; her monologue about Mukhtar Mai, on its own and as part of SEVEN, was produced most recently in India, Afghanistan, Jordan and Sweden. THUMBPRINT, an opera based on Mukhtar’s story, with composer Kamala Sankaram, will run January 10–18, 2014, at Baruch Performing Art Center. Her work has been translated into 14 languages and she has received grants from MAP, NEA, Guggenheim, McKnight and Rockefeller Foundations, among others. Her archive is catalogued at Kent State University. Website: www.susanyankowitz.com.

SUSIE YURÉ (Associate Producer) has volunteered for 30 years in non-profit organizations, in which she has held leadership roles in fundraising, event planning, facilities coordinating, programming, membership, marketing, and administration. Susie has produced musical theatre productions, classical concerts, cabaret performances, and has been intensely involved in the world of theatre for over 20 years. She holds a Bachelor’s and Master’s Degree in Elementary Education from USC, along with her California Lifetime Teaching Credential. Her favorite role is as mom to her two talented (grown) children, who are both professional (and working) musicians.

ROSE ZIFF (Associate Producer) Rose is the most recent member of the JWT team, and is new to performing arts. She has come out of retirement after working at UCLA Medical Center for 33 years, where she functioned as “den mother” to over 1000 interns, residents and clinical fellows at UCLA, the VA and Olive View-UCLA Medical Centers, providing resources and support. She is looking forward to opening this new chapter in her life and thanks Susie Yuré and Ronda Spinak for giving her this opportunity.

The Aunt I Wanted to Be
Written by Marge Percy, performed by Amy Handleman

When I Fall In Love
Vocals by Shira Fox

In Contemplation of my 70th Year
Excerpt from the book, How to be a Friend to a Friend Who is Sick. Written by Letty Pogrebin, performed by Arva Rose 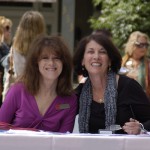 Suzee Cohen and Susie Yure´at the check in table. 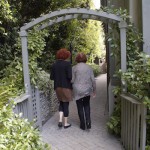 Patrons entering the lush backyard for the Fall Party. 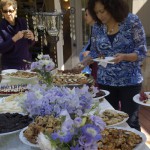 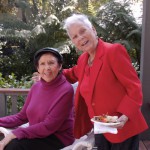 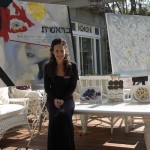 Artist Marilee Tolwin with her artwork. 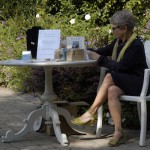 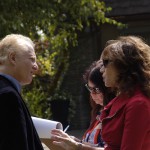 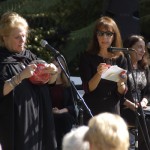 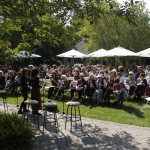 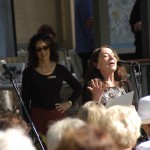 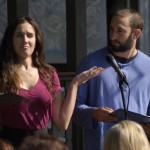 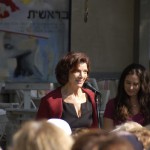 Arva Rose tells the story of her first kiss at age 10. 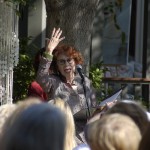 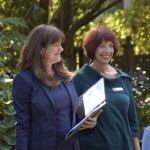 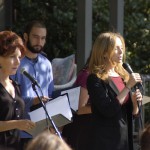