The Blessing of a Broken Heart

This one-woman show follows Sherri Mandell, a young American mother, who moves her family from Maryland to the wilderness of Israel in search of meaning and adventure. When a shocking tragedy hits her family, she embarks on a profound journey of discovery and spiritual transcendence. 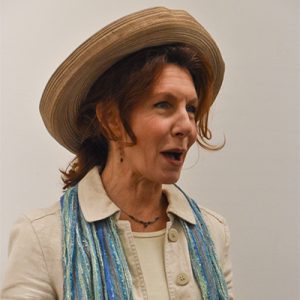 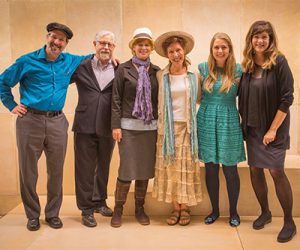 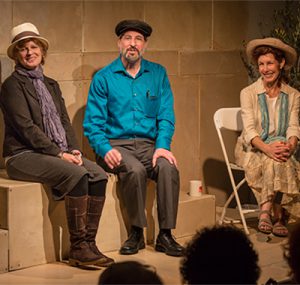 LISA ROBINS (Sherri) has been honored to have played the role of Sherri in The Blessing of a Broken Heart from its first public readings and subsequent run at the San Diego Rep, to libraries, schools, JCCs and theatres across the U.S. & Canada. After growing up “Jew-ish,” with no ritual whatsoever, yet always curious about what it meant, the “Jewish phase” of Lisa’s career began with Hairpieces (produced by the predecessor of JWT) in 2000, soon after her daughter, Renata, was born. Upon her return from a stint in NYC where she performed in 2 original plays back to back, Lisa won the lead in Cornerstone’s Center of the Star, written by Yehuda Hyman (who eventually recommended her for Blessing). She has since enjoyed a plethora of Jewish roles, leading her to joke about being typecast as the “New Jew.” Lisa was an atheist Jew in Center of the Star at the Greenway. In Cornerstone’s Long Bridge, directed by Bill Rausch at the Ford, she was a lesbian Jew. Michael Elias’ Catskill Sonata, directed by the late, great, Paul Mazursky at the Hudson and Matrix allowed her to be a socialist/bohemian Jew. Lisa’s been a proud member of the JWT community since the first Salon show held in Ronda Spinak’s living room, creating an abundance of wonderful characters all written by Jewish women. Other LA theatre includes Nora & Delia Ephron’s Love, Loss and What I Wore (d. Jenny Sullivan), at the Geffen, Tom Baum’s Shock Therapy (d.Jenny O’Hara), Hal Ackerman’s Testosterone (d.Michael Arabian), and most recently Gena Acosta’s Good in Bed (d.Asaad Kelada) at the Actors Studio where she is a lifetime member. Film & TV include The Rum Diary opposite Johnny Depp, Mildred Dean in James Dean, (d.Mark Rydell), Henry Jaglom’s Ovation, & many other films, guest stars, & commercials. She is currently performing the poems of Ricardo Quinones at various venues around LA.

Special thanks to Todd Salovey who allowed Lisa to help hone the script while giving her a Jewish education to enrich her character (and her life), Ronda Spinak for giving Blessing an LA home, all the previous kids and families involved with Blessing, and Rabbi Naomi Levy, who so generously gave Renata her education and bat mitzvah. Robbie, who taught her how to survive deep grief, Kitty, Rick & family for being here, and to Lisa’s most stellar work of art, Renata, who has taught her the deep riches of what it means to be a mother.

TODD SALOVEY (Director and Adapter) is currently in his 26th season as associate artistic director of San Diego Repertory Theatre. He has won an Edgerton Foundation New Play Award for The Blessing of a Broken Heart and has directed it at San Diego REP, Arizona Jewish Theatre, and two East Coast tours. Other favorite Jewish work at SD REP includes The Dybbuk, with original music by Yale Strom, and Yehuda Hymen’s mystical comedy with ecstatic dance, The Mad Dancers. His one-man adaptation The Dybbuk for Sam and Hannah’s Wedding, will premiere at SD REP this fall, starring Ron Campbell. He is a frequent collaborator with Culture Clash’s Herbert Siguenza, and their production of A Weekend with Pablo Picasso as been seen at the Alley Theatre, Denver Center, Arizona Theatre Co., LATC, SD REP, and Center Arts REP. Other SD REP productions include Outside Mullingar (currently at SD REP), Who’s Afraid of Virginia Woolf (also at LA’s Blank Theatre), Uncle Vanya, King Lear, Death of a Salesman, The Illusion, and Hamlet, which starred Jefferson Mays. He also adapted and directed A Hammer, a Bell, and a Song to Sing, based on the life and work of Pete Seeger. He is on the acting faculty of the University of California, San Diego. Salovey is also the founding artistic director of the Lipinsky Family San Diego Jewish Arts Festival, which commissions new work exploring Jewish traditions in contemporary forms. He is married to Diane Boomer and is the proud dad of Leah and Aryeh.

SHERRI MANDELL (Author of the Book)

SHERRI MANDELL (Author of the Book) won a National Jewish Book Award in 2004 for her spiritual memoir, The Blessing of a Broken Heart (Toby Press, 2003). Translated into three languages, the book was adapted into a stage play, which opened at the San Diego Repertory Theater. Her latest book, The Road to Resilience: From Chaos to Celebration (Toby Press, 2016), details the spiritual stages of resilience. She and her husband, Seth, direct the Koby Mandell Foundation, founded in honor of her son who was murdered by terrorists in 2001 when he was 13 years old. The foundation runs Camp Koby and other programs in Israel for bereaved children and families. She has been profiled in The New York Times, and the work of the foundation has been reported on NBC, ABC, and CNN and in major newspapers. A certified pastoral counselor, she lectures about resilience and grief around the world. She is also the author of Writers of the

Holocaust (Facts on File, 1999) and has written for numerous magazines and journals. She currently blogs at The Times of Israel. She received Moment Magazine’s prize for best short fiction in 2009 and a Simon Rockower prize for the personal essay in 2011. She and her husband are also the recipient of the ADL Partners in Peace Award, and she was one of Jewish Women International’s Women to Watch. She and her family live in Israel. Kobymandell.org. Facebook: Sherri Mandell sherri@kobymandell.org. mandellsherri@twitter

RONDA SPINAK (Producer, JWT Artistic Director) created and produces JWT’s At-Homes Salon Theatre Series, now in its eighth season. She has curated more than 24 original Jewish-themed salon shows for JWT, as well as adapted many of the pieces performed. Her plays include Stories from the Fringe and festival-winner Oscar Wilde’s Wife, a favorite at the Ashland New Play Festival and Dayton’s FutureFest. She has written for the Emmy Award-winning children’s show Rugrats and authored the critically acclaimed nonfiction book ProBodX: Proper Body Exercise (Harper Collins, publisher). She is on the board of the Association for Jewish Theatres and is a member of the Dramatists Guild. She graduated from Stanford University, and holds degrees from UCLA (MBA) and USC (Masters in professional writing). She feels blessed to be working with the many talented and inspiring women who give so generously to Jewish Women’s Theatre. She also wishes to thank ADR for his support.

GIULIO CESARE PERRONE (Set Designer) is also a playwright and stage director. Giulio co-founded the Inferno Theatre, of which he is the producing artistic director. Giulio began his career in his native Italy, where he directed and designed mainly for the theatre, then moved to the United States in 1995 and now has more than 200 theater and opera productions to his credit. Giulio received a 2000 Pew National Artists Residency grant for his adaptation of Milton’s Paradise Lost and received a 2002 Pew Theatre Communications Group grant for his adaptation of The Memoirs of Jacques Casanova. Giulio has worked for theaters and opera companies that include the San Diego Repertory Theatre, the San Jose Repertory Theatre, Festival Opera, Dell’Arte, Opera San Jose, California Shakespeare Festival, Theatre Works, Traveling Jewish Theatre, Marin Theatre Company, and the Alley.

MARY LARSEN (Costume Designer) holds an MFA in theater from the University of California, San Diego. Credits: for the San Diego Repertory Theatre: Zoot Suit, Hairspray. For New Village Arts: Stage Kiss, To Kill a Mockingbird, The Trip to Bountiful, Death of a Salesman, Summer and Smoke, Golden Boy. For the Old Globe: Hold Please: Lobby Hero. For the LaJolla Playhouse: A Feast of Fools. For the North Coast Repertory Theatre: Little Women. For Ion Theatre: The Lieutenant of Inishmore. For Intrepid Theatre: The Quality of Life. With Todd Salovey: The Blessing of a Broken Heart, A Hammer, a Bell and a Song to Sing, The Road to Mecca, The Dybbuk, and Krapp’s Last Tape. Mary is looking forward to Golda’s Balcony with Todd at New Village Arts in June 2016.

ALI VITERBI (Associate Director) is honored to work on this very special and important play. A recent graduate of Yale, Ali now lives in New York City and divides her time between her two greatest passions: acting and playwriting. Ali assistant-directed the Old Globe’s Two Gentlemen of Verona, dir. Mark Lamos, as well as the San Diego Rep’s The Who’s Tommy, dir. Sam Woodhouse. Her plays have had productions and workshops across the country, from New York to California, Georgia, Connecticut, and even Alaska. Ali has also been fortunate to play some of Shakespeare’s greatest heroines in New York City, including Desdemona and Cleopatra. Eight years ago, Ali played Sherri’s daughter in The Blessing of a Broken Heart at the San Diego Rep, and she is excited to once again work with Todd, Lisa, and the team in a different capacity.

TOM JONES (Sound and Projections Supervisor) is currently the audio/video supervisor for the Wallis Annenberg Center for the Performing Arts in Beverly Hills. He was previously the sound supervisor and resident sound designer for the San Diego Repertory Theatre. Previous designs include those for the Wallis’s Inaugural Gala, Love Noel, Baseball Swing, and Trumpet of the Swan (the Wallis), as well as The Who’s Tommy, In the Heights, The Three Penny Opera, Lipinsky Family Jewish Arts festivals, The Road to Mecca, The Blessing of a Broken Heart workshop, and A Hammer, a Bell, and a Song to Sing (SD Rep).