Inside Our Time: Untitled by Suzanne Gelbart 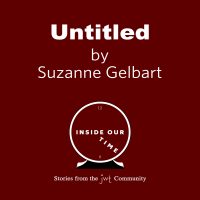 All right.  I don’t lie.  Shit is jacked.  I’m writing to you from America in the year 2020, which you actually have to write out fully on every document placed before you because apparently some genius was all “They could fill out whatever year they want to after the ’20,’” which makes zero fucking sense because we could have done that through all of ’19 as well and no one blinked.  That is the kind of dumb-ass mentation we are forced deal with now.

For the record, I would rather go through this fuckery with ANY SPECIES ON THE PLANET OTHER THAN HUMAN BEINGS.  I would deal with pigs, dogs, birds (who are bona fide assholes) and even horses – who personally scare the shit out of me and require too much upkeep for the kind of lip they give.

If I had my druthers, my personal preference of animal to weather this storm with would be  raccoons.  I have very valid and rational reasons for wanting to ride and die with them, but that can wait for a future debate.  I seriously doubt anyone has given more thought to their apocalypse-sidekick animal than I have.  Raccoon. Every Fucking Day Of The Week.

But let’s move on to our new reality, shall we?  My mamas, my papas – we are on our own here in limbo land.  I don’t know what that means other than if you get too close to me at the grocery store, I’m gonna elbow you in the tit… but I will also give you half of my toilet paper if you need it.  We gotta take care of each other.  We are all freaked out (or should be) and we can eat each other later if it gets to that.  For now, let’s just be kind?

My dog is apparently fully attuned and adjusting to this new reality. Nine confirmed kills over the last two weeks.  Dog knows when he needs to step his game up to prove his value to the fam, yo.  He just dumped, yet another gopher (which looks like a russet potato that grew disturbingly large teeth) in the house. But it’s him, picking up on the vibes in the ether, doing his part to let us know there are means, there is sharing, and if we take care of each other we can make it through this.

Let’s hope the day never comes when I’m sending you the recipe for gopher pie.  But if I do, you better damn well believe it’s gonna be delicious.  Stay safe.  Imagine me dry hugging (TM) the shit out of you.

Thank you Suzanne, for your story! “Inside Our Time” digital series: