Inside Our Time: Untitled by Sherri W. Morr 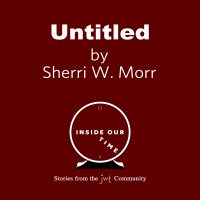 I hope you are still well, still distancing and yet still somehow enjoying life as it is.  For us it is getting a little boring I must say.  I have about had it with virtual tea and cocktail parties; museum trips where I pace the photos alone; reading the many options for an 11th plague, and how best to fill the virtual seder plate.  I am conducting serious research on handwashing and hope to connect it to refugees, hunger, the motzi, and fear of all things evil.  Including pandemics during Passover.

Passover has never been my favorite Jewish holiday…so much cleaning, worrying about things like crumbs that really should have been obliterated months ago thanks to the invention of the vacuum cleaner, and then later the dust buster.  The idea of selling all those accumulated crumbs has to be just another way to separate people from their money.  I think we have many legitimate reasons to give tzedakah and do not need to lower ourselves to see our own crumbs swept up in the dark with a feather… God knows where they may have been.  Yech if you get my drift!

So, I like the idea this year of a national movement to perhaps do less on Passover.  Just say the 4 kashers, spill a few drops of wine and then indulge in the age-old Jewish mantra of  “Let’s Eat.”

Pico Blvd. is still pretty quiet and actually few autos are fighting over parking spaces.  Many bakeries have Order Your Passover Cakes NOW signs, and most unfortunately there are many homeless and their accoutrements back on bus benches and in front of stores and shops.  I would suggest Wednesday morning would not be a good time to be on Pico.

Passover ignites certain memories for me.  For example my grandfather gave his cigar ring (paper, but colorful) to the grandchild who found the Afikomen.  Decades later I realized what a paltry prize that cigar ring was.  After dinner the men stayed at the table while the women cleared and went in the kitchen to smoke and clean the dishes.  My grandmother stayed at the table where they brought out the chips, cards and played serious poker until the wee hours of the morning.  We, the original seven grandchildren, watched TV, then proceeded to argue and fight usually until someone (yes you guessed it, me) started crying and we were sent to bed.  The next day was like any other day except my grandma made matzah meal pancakes for breakfast for all the kids.

I believe the blockbuster movie The Ten Commandments came out around that time and for most of my growing-up years I truly believed Charlton Heston was Moses.  It won Best Picture at the Oscars in 1957 and Special Effects which makes perfect sense… I can still see Heston throwing down the first set of ten commandments expressing rage and anger at the poor Israelites who doubted his return and built graven images during the long wait.  In June of 1998 when Heston became President of the NRA loving guns I decided with great certainty he was never a Moses I could believe in.

I have a trove of Passover experiences which I shall not bore you with.  During my days living in an orthodox community I felt a lot of misery about the amount of work women had to do to clean and prepare for this 8-day festival which in addition to expressing freedom was also set to relish spring and sunny skies.  (It’s been cool, rainy and overcast in LA since the isolation.)  I envied families who locked up their homes and chametz and went to fancy hotels where they were served, and no clean-up was required.  Many of my women friends had band aids on their feet from standing and cleaning and cooking; I felt generally oppressed.  This year we will flip onto ZOOM, say the prayers, hear the story, sing the songs and make the infamous matzah sandwich; then we will eat on our own.  Sounds sad and lonely.  Then the next night we will do it again.  Then 6 days of matzah brie, matzah balls, and kugel galore and the fancy cakes if you ordered them and paid the $36 for them.  Then it is done, over, and the next morning you can go back to artisan breads from fancy bakeries and throw away all the unused matzah.  BUT the vacuuming the crumbs, the ones you got rid of 8 days ago and sold to the rebbe with the longest beard will again be in every nook and cranny in your house.

I wish you a healthy holiday and hope for together next year in Jerusalem.

Thank you Sherri, for your story! “Inside Our Time” digital series: