Inside Our Time: Untitled by Renee Siegel 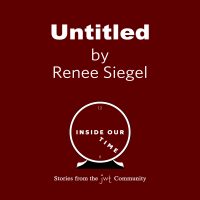 From probably one to twenty something years old I can picture Grandma Rose carrying up dish after dish from the kitchen in the basement that was kosher for Passover.  Every year she and my grandfather Sidney would walk up three long flights of steps carrying huge gleaming pots of steaming kneidlach and soup, like two Yiddish magicians about to perform their Jewish Magic.  Elaborately decorated utensils in hand, ladles and huge knives rather than wands.  My handsome grandfather smiling with a pride and joy that never left his posture and face once during the entire event.  His black wavy hair combed back highlighting his blue eyes that didn’t stop rejoicing for a second to be surrounded by his family on this holy day.

Ahh, and grandma, her natural light blonde hair pulled back in a messy chignon, the same and only lipstick she ever wore, pure red, never another drop of makeup, and the most gorgeous skin with the eyes of pale blue that people die for.  I can still see her face not as calm as grandpa’s was, thinking of getting each course up and perfect.  Pure mayhem in between at this point.  Yiddish flying through the tenement apartment like language kites strung from each corner of their living room.

After all the reading from the Haggadah, and I am not talking abridged, but full Eastern European first generation here, (do it right!) version.  Laughter interspersed so heavily but, mainly between my mother and her brother, a la my grandfather in the background continuing his service without missing a beat, not paying the slightest attention to my uncle’s nonstop jokes to my mother’s delight.  Actuall, in these seders what I REMEMBER most is my mother laughing so hard trying to catch her breath, joke after joke, enjoying each one he or she told more than the one before, the more she wheezed, the more I did too.

I don’t know what this phenomenon is of when a parent laughs uncontrollably, it makes their child laugh unconditionally equally as hard.  FYI No drinkers here, this was pure fun.  l mean there was the token Manischewitz that we were required to partake in.  Then the rest of us, the kids would all laugh just hearing them laugh, having no idea what the jokes were about, and when we were old enough to understand them, I still remember laughing more at my mom laughing.  Gosh she loved to have fun, and yet understood depth and despair very well.  If someone was in pain or spoke of a psychological problem she was fascinated and wanted to help.  I guess you could say she could swing both ways.  A very complicated and unusual person.

But, at these seders it was mainly fun for us.  I can’t even imagine the amount of work that grandma and grandpa, and Bubbi put into this to give us these memories.  Bubbi was always smiling softly, so sweet, cooking, baking, crocheting and praying.  She had so many wrinkles, they were undulating, flowing down her face on the sides of her cheeks, and forehead, beautifully natural so unbotoxey.  Her hair was down to her waist and usually in a long braid, a perfectly neat one every day, sometimes coiled into a bun, her only adornment were two small diamond  earrings.  Her clothing, she made all of it and was exquisite, it’s how she and grandma escaped out of Poland.  More of that another time.

It took weeks of cooking before and then the clean up, every dish, I have to meditate just thinking of it.  No Order in back then.  On the other hand, after escaping from Poland and Romania as Jewish refugees being so brutally persecuted and having family members murdered, it makes perfect sense to create the largest celebration possible of each Jewish holiday where they were able to do this freely.  So, I guess looking at it this way, going up and down those three flights of steps many times with filled platters of dishes and food changes the whole perspective tremendously, being able to freely feed one’s family.

I also can picture every apron my mom, grandma and Bubbi wore, spring floral for Passover and our clothes, big skirts that when I spun around they would continue spinning, seeming to take five minutes to come unswirled, usually on the floor from playing.  New and fresh outfits for the Jewish holidays, always, and Patton leather shoes with T straps and fancy tights.  So we would all look so nice, so festive, so holiday-ish on our way over to my grandparents house.

Funny that the same crocuses, forsythias, and lilacs are filling the air and dotting sidewalks back east as Jewish children play outside during Passover week and notice how special the world is outside around them during this holiday especially as things come alive, awakened.

But, this year it’s obviously different due to Pandemic which seems ironically straight out of a Passover scripture.  Passover was always there, because of course they were kosher.

So let me tell you about the end of the meal, the very end, which was very, very late at night.  Sometimes when we were still young we would get into pajamas half way through, and the finale after all the other special sponge cakes, layer cakes, macaroons, sugar coated red, yellow, green, orange joy va gels, dried fruits, grandpas fruits from his fruit trees in his backyard, then ……trumpets please blow !!!!??

The prettiest softest shade of towering pink I ever have seen still to this day, mounds and  billows of it on grandma’s finest desert China was served.  Breathless still from the imagery that cotton candy-like memory still conjures of floating Jewish pink magical carpet rides, it was something out of an Israeli Aladdin.

Truthfully, I never ate it, and don’t recall if anyone did, or how much they consumed of it, what matters is the memory of it.  To me it could have been the cherry trees abloom in Japan, floating in each of grandma’s dessert plates up those steps over sixty years ago, which I can’t go to either place now. But, if given the choice which I would choose, the exotic, foreign or the pink Pesach clouds, you know where you would find me

Thank you grandma and grandpa

And Bubbi for making that so difficult journey  to America that I can’t even imagine, and going the full nine yards for the memories that you created for us once you got here 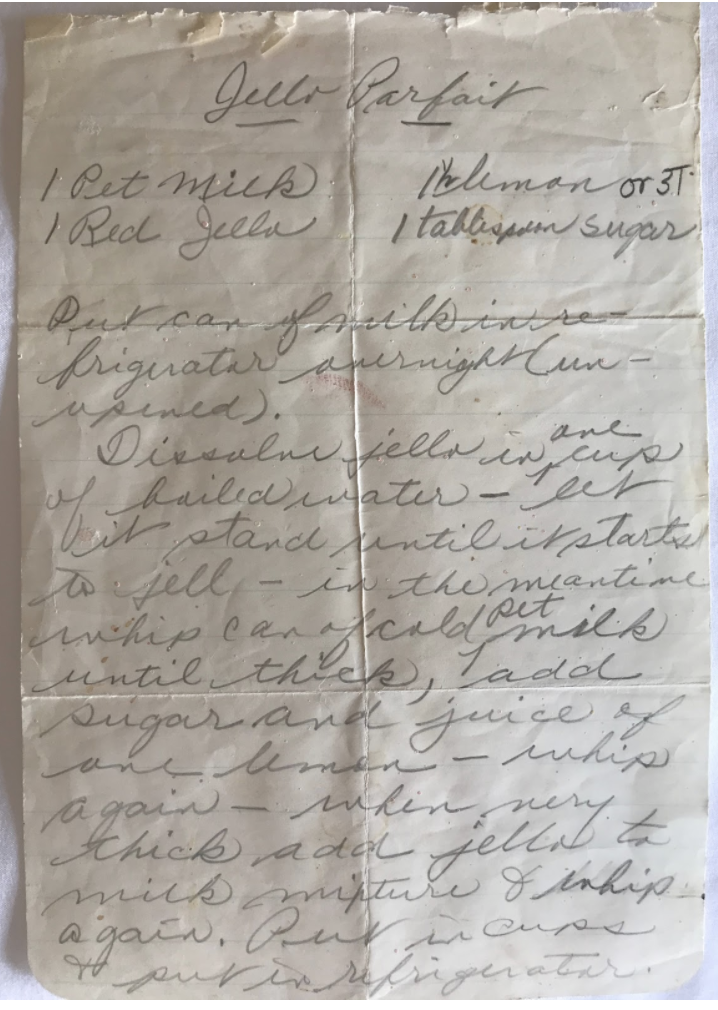 Thank you Renee, for your story! “Inside Our Time” digital series: