Inside Our Time: Untitled by David Masello 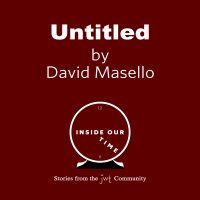 During this viral curse, I hear from a witch.  At least that is what he claimed to be when we met ten years ago.  (Though friends tell me Wican is the proper term for the male.)

Something I think we have all learned from the virus is that has worked as an emotional filter.  Those who matter to us come to mind when we’re alone through this;  we, in turn, enter the minds of people we might have long forgotten, but who haven’t forgotten us.

It was when I was in bed last night, hearing the roar of a silent New York, and scrolling the dating sites after having completed the crossword puzzle, that I received a message from a person named Franco.  These many years later I didn’t recognize his image, a handsome man now in his late 30s.  But he remembered me.

He was young and pretty then, and I took his dramatic admission to be an act of drama from an underemployed actor.  He rolled up his sleeve to show me his solid black pentagram tattoo emblazoned in the crook of his arm.  I had never before felt tattooed skin and expected the pattern to be raised, embossed on his body.  But the design was flush with his smooth skin.  Later, I brushed the emblem with my lips, certainly not out of adoration for his chosen cult, but to seal the deal with us.  I’d always told myself, a man with a tattoo was a deal breaker, but, then, I was willing to adapt.

We had met online those many years ago and decided to rendezvous on a West Village pier, since it was a hot summer day.  The river waves thunked steadily against the pilings like a clumsy metronome.  We later walked the length of the High Line, each pointing out our favorite vistas, eventually wandering to my midtown apartment for dinner.  I handed him a bottle of Riojas to uncork.  It was a silent Sunday early-evening in August, when you can feel like the only person left in town—a ruminative silence, different than the ominous one which now envelops the city.  I watched him through the pass-through that links my galley kitchen to the dining table as he shook the tablecloth free of crumbs out the window and then flung it in the air, like a toreador, draping it over the table as if it was a holy shroud.  Seeing the care he took with a simple domestic task, I felt a kind of love for him.  I handed him a box of big kitchen matches through the pass-through recess and as he struck one, smoke rose like a magician’s trick; he then tipped each colored glass votive to reach the wick.

After dinner, I took one of the ruby-red votives abeat with its candle, and as if we were performing some kind of witch-like ritual, I walked with it into the other room, he following.

And I quickly got another lesson in how unreliable memory is, especially if you are a writer.  A writer puts down on paper details about an encounter that he wants to believe are the facts, and they remain so in the memory even if they are inaccurate; they become the truth.  As we thumbed texts to each other past midnight, recounting our encounter those years ago, I asked Franco whether he was still a witch.

“Where did you get that idea,” he said, “I was never a witch, though I am a believer in crystal healing.”  I reminded him of his pentagram tattoo.  “It’s an image of a spade,” he wrote back.  “Some of my family are Italian Jews, from up near Turin.”

I told him that I had written a poem about him those many years ago, and had also included him in an essay that I had performed before a live audience, describing my date with a witch.  He professed great interest in wanting to read those pieces when we can meet again in the nearish future.  Witches, it seems, cast spells that linger.

Thank you David, for your story! “Inside Our Time” digital series: