Inside Our Time: Saying Goodbye from 6 Feet Away by Jonathan D. Salant 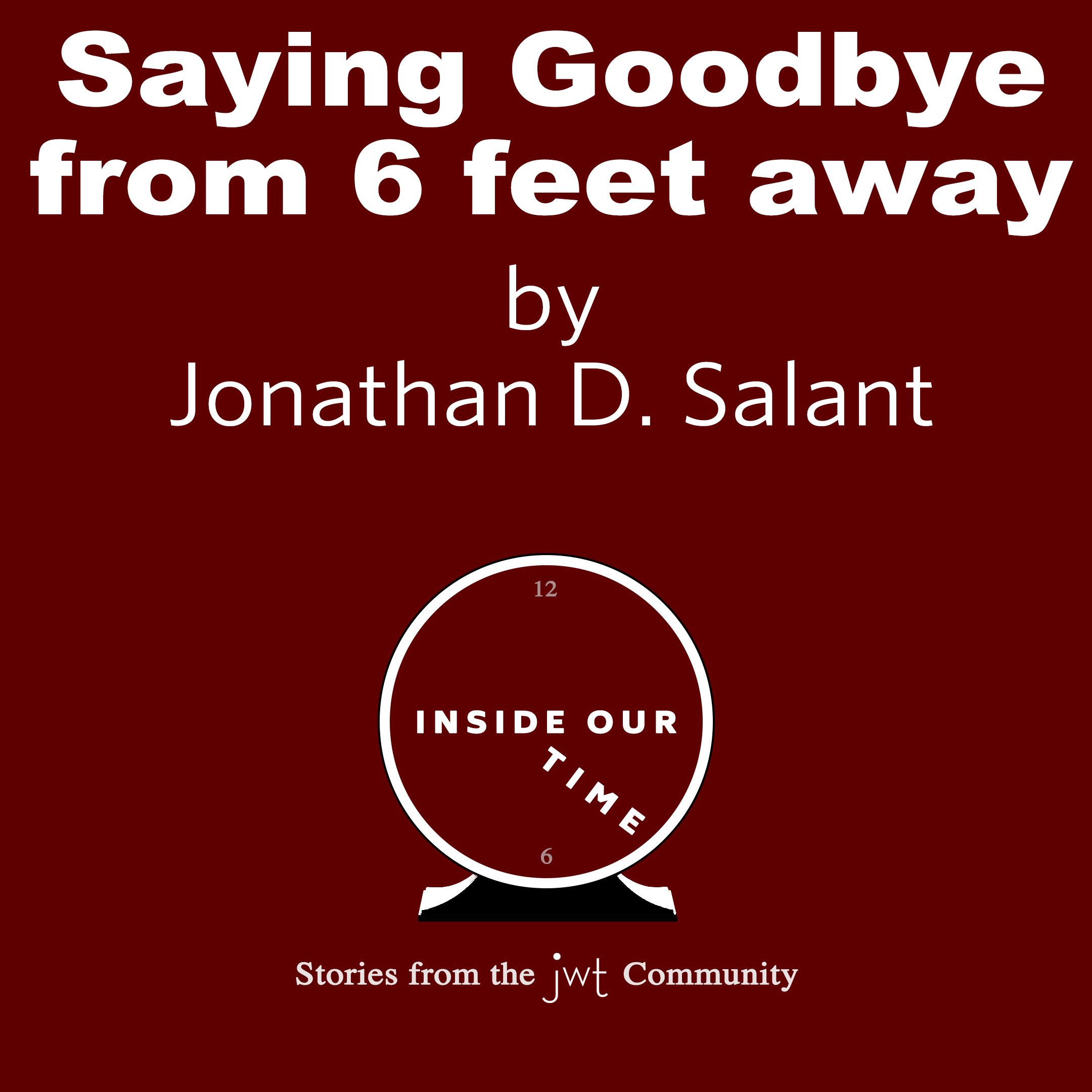 My uncle’s heartbreaking burial during coronavirus:  Saying goodbye from 6 feet away.
(as posted on NJ.com website)
by Jonathan D. Salant

No hugs.  No shoulders to cry on.  Stand six feet apart. And use your outside voices.

My Uncle Sam, my father’s brother, passed away over the weekend at age 91, and that set up a conflict between Jewish tradition, which requires a quick burial, and Gov. Phil Murphy’s lockdown restrictions designed to prevent the spread of the coronavirus.

Still, unlike the Beatles’ Eleanor Rigby, we were going to make sure that some people came.

But first we had to check that we were following the guidelines for family events — yes, I did ask the governor’s office — before gathering at the Floral Park Cemetery in South Brunswick on Tuesday to give Samuel Salant a proper burial.

It was small by necessity.  His last surviving sibling, my Aunt Eileen, was there.  But my 92-year-old mother stayed away, though you wouldn’t have been able to keep her away any other time.

This was no time to risk her health.  After all, my uncle, who died of heart disease, wouldn’t have known if she was there or not.  My other aunt stayed home for the same reason.

So it was the nephews and nieces who came together on a brisk, sunny day in March to say goodbye to our Uncle Sam, born on the fifth of July.

Yes, that was his birthday, and my mother used to get quizzical looks when she’d go to the bakery for our annual Independence Day cookout and order a cake for him with the message, “Happy Birthday, Uncle Sam.”

I have been to many family funerals before — too many unfortunately, including for my father, both grandmothers, my other uncles and my first wife — but this one, for Uncle Sam, was unlike any other.

The rabbi who conducted the service, Jonathan Rosenblatt, began the service by showing his talent for understatement.

“We are gathered in radically unusual circumstances,” he said.

“May this time of distance be soon replaced by a time of closeness,” said the rabbi, who officiated at the Bronx synagogue where my uncle worshipped for more than three decades, always sitting in the same seat.

My thoughts of my uncle, a former New York City public school principal, were constantly hijacked by the reminders all around me of what a surreal time it was.

The huge cemetery was almost deserted except for our gathering and one other group.

We normally would stand close together, united in sorrow.  Instead, we stood in places more appropriate for a basketball team’s four corners offense rather than for a group of relatives mourning our loss and comforting one another.

The one saving grace was that with only eight people, it was easy to practice social distancing and still hear the service.

The rabbi delivered the eulogy, with a nod to the times in which we live.  He read messages sent to him by two of our cousins who had to miss the funeral for health reasons.

My cousin Neil, who lives in Rockaway, spoke for everyone when he described U.S.  — that’s what we all called him — as “a very special uncle.” Uncle Sam had never married and had no children of his own, so the 10 nieces and nephews laid equal claim to him while we were growing up.

When the service ended, we took turns shoveling dirt onto the casket.

I’ve done this many times before, but first we all donned disposable gloves lest any of us contract the virus through a shared shovel.  Jewish tradition calls it an act of true kindness because it is one favor that the beneficiary cannot pay back. Then the cemetery workers, also wearing gloves, finished covering the grave.

And then we ran into one other problem unique to these days: The memorial prayer known as Kaddish is supposed to be said only in a group of 10 or more Jews aged 13 and older, known as a minyan.

Ordinarily, that’s not a problem, since friends and family coming to pay their respects and comfort those who have lost a loved one usually ensure there are plenty of people around.

Not this time, though.  We used a special version of the prayer for when there aren’t 10 Jews.

I’m sure my uncle didn’t mind.

Reposted from NJ.com – click here for the original publication.

Thank you Jonathan for your story! “Inside Our Time” digital series:

Want to submit?? Just email a piece, 50 to 350 words to coronalife@the-braid.org