Inside Our Time: Mrs. Noah’s Story by Sheila Walsh-Vargas 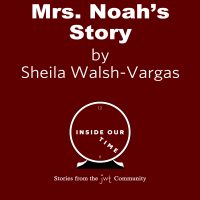 Namah
Oy Vey!  (Holding her head, swaying back and forth).  I can’t believe I’m seeing the light of day.  (blinks, sits back).  Let me tell you, this has been one hell, (stops, mouths it, looks around) of an experience.

Oy, I’m warning you.  LISTEN TO GOD next time!   Once that rain started, it didn’t stop.  (looks up).  The rainbow is a beautiful sight.  Know what I got to see for forty days and 40 nights?  Dark, dingy, gopher wood!  That arc was so huge.  Very little color inside.  We only had one window.  We didn’t have the modern conveniences you have now, like….lights for one thing!

You may wonder how we made it.  Do you have a couple of days?  No?  Okay, I’ll make it as brief as possible.  Here, (picks up journal, opens it). I’ll read from my journal.  Let’s see….yes, the ark was probably the largest sea vessel built.  Since God gave us the measurements it was impossible to turn over.

Remember the cargo we had?  All those animals!  (points to animals)   Mama Mia!  (Italian dialect)  Thank goodness we got the big animals like elephants when they were babies.  How did they get in the ark, you ask?  Well, don’t forget, God was behind all of this.  Somehow he called them two by two.  Others possessed a sense of danger and began moving to places of safety.  But the smell!  Oy…you don’t want to go there.

What did we eat?  Food (sings) glorious food!   Since we were vegetarians, we gathered enough plants, seeds and other non-meat items.

But once we had lodged and got out of the arc, all of us had to be brave.  The first view of the mountains of Arat was incredible.  The world we had known was completely transformed.  Only fossils reminded us of the death and destruction that went on.

You see, I pulled through because I knew Noah and I were called to a greater purpose.  I was married to a savior really.  God used Noah to save the world’s human population from extinction.  (pause, look off in distance).

After the flood, God led us to move to different parts of the world where languages and humans changed.  And humans sure learned to look and act differently toward each other!  Do you know how many races there are? (points to audience member)  Can you guess?  (point to someone else) One!  There is only one human race.  One race, one nation, one blood.  (Sings “We are Family”).  We are ONE mystical body.  THINK about that!  Color doesn’t matter.  DNA differences are trivial.  Stop fighting.

You know in our days, people were eating and drinking and carrying on as if life would go on forever.  Sound Familiar?  The way the world is dealing with sin today is very scary.  Are you listening to ANYONE who is telling you to change?  Are you seeing signs that will ultimately destroy the world again?  Oh no, not by flooding.  God promised not to send another.

But humans have created greater weapons than we had in our day.  Environmental changes in weather and the atmosphere are affecting everything on earth.  Kids are bringing weapons to school and killing each other.  Terrorists rage everywhere even in unexpected places.  Human trafficking is growing.  No place is safe anymore.  Technology increases but good relationships don’t seem to be catching up.  Do you know ANYONE who could save you if your world was destroyed?  There are other ways besides water.  Maybe this time…by fire , Virus? (pause)  Who knows?

Thank you Sheila, for your story! “Inside Our Time” digital series: