Inside Our Time: Leaning Sideways by David Suissa 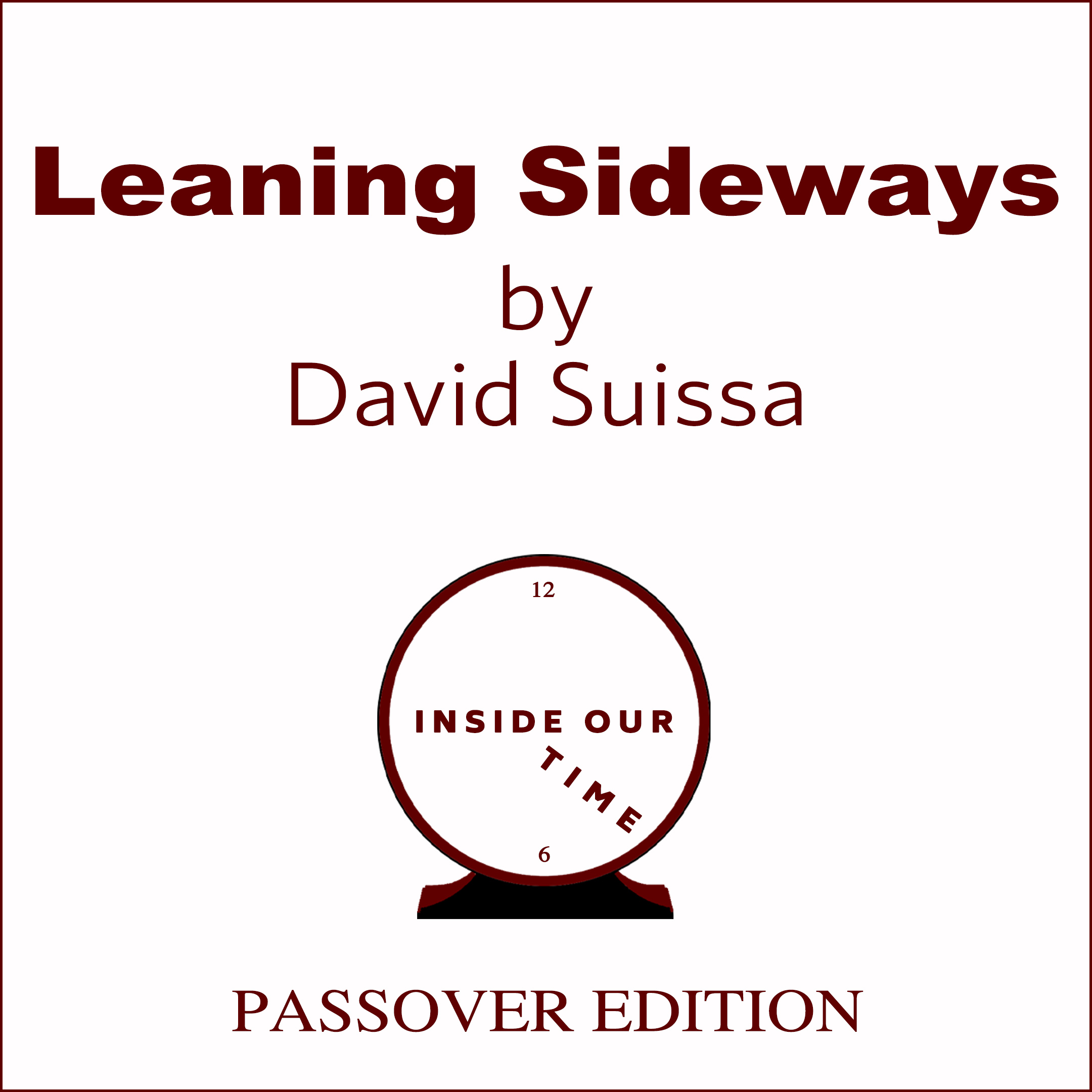 I am ready for a seder full of questions this year.  I’ve done my homework, gone to classes, read essays and books.  I prepare questions. A seder is like a mini-Beit Midrash, a table of learning, debating and understanding.

After synagogue services, armed with my questions and shivering in the cold of Montreal, I walk to my sister’s house for the first seder.  The place is loud and festive. The kids are playing and reconnecting with their cousins, grown-ups are catching up on the past year. And my mother is in my sister’s kitchen acting as if it were her own.  It is a scene right out of Woody Allen’s “Radio Days” – everyone competing to see who can speak the fastest.

I look at the joyful chaos around me and wonder if I’ll be able to introduce some learning into the evening.  As our noisy group takes their seats at the table, a book comes to mind: “We Plan, God Laughs.” It is clear to me that God is now laughing at my plan for a neat and orderly seder with lots of meaningful discussion.  How can I compete with all this happiness? I’ve got to face it, the theme of our seder is family joy, not ancestral angst.

Once we complete the rituals and begin the meal, something unexpected happens.  Not from Moses or Pharoah, but from my 94-year-old uncle, Tonton Michel.

Tonton Michel has been attached to our family since he was a kid in Morocco, though technically, we’re not related.  He’s been married to the same woman for 68 years. They’ve never had children and have no relatives in Montreal. But they’re so close to our family that we’ve always called them uncle and aunt.

They’ve been fixtures at our seder and holiday tables since the mid-1960s, when we all moved to Montreal.  Although I’ve probably seen them hundreds of times, I don’t recall ever having a real conversation with them.  We never did anything more than small talk or exchange expressions of affection.

But this year my sister has placed Tonton Michel next to me.

With the festive noise of our seder showing no signs of abating, I decide it is a good night to finally get to know my uncle.  So, I lean sideways to ask him a few questions.

I learn that growing up in Morocco, one of his closest friends was a Muslim man who had a partly Jewish name. He was probably a descendant of the Marranos several centuries earlier.

My uncle reminisces about seders 80 years ago in his Jewish neighborhood of Casablanca – what his mother cooked and who would come over, how he met his future wife, and how he loved the night of Mimouna (held the night after Passover ends) when Arab neighbors would help the Jews prepare the traditional sweet tables.  I could tell he still misses the old country.

I also learn that Jews in Morocco were clever businessmen.

He shares, his favorite story, that of an old Jewish merchant who made sandals using discarded tires.  When a customer complained that the same sandals sold for a lot less somewhere else, the Jewish merchant explained that his sandals were worth more because he used Michelins.

My uncle keeps pouring out stories and I keep leaning over to ask him questions – none of them following any Passover script.  Instead of Pharaoh, we talk about the King of Morocco. There are no questions about the deeper meaning of slavery or the symbolism of matzah.  Nothing about the personal significance of our people’s master story.

The only story that captures my attention is that of my 94-year-old uncle.  The questions are not historical, but personal. It isn’t “tell me about our ancestors,” but rather, “tell me about you.”

After 40 years of spending time with Tonton Michel, I finally hear his story.  I break the rules of the seder: I lean sideways not to eat matzah but to listen to my uncle.

But, as I reflect, our collective master story is really an accumulation of millions of personal stories like the one I’ve just heard.

I see the look on my uncle’s face after he has told me his own story; it is like seeing a man who has come back to life.

I don’t just learn about personal liberation, I witness it.

Thank you David for your story! “Inside Our Time” digital series:

Want to submit?? Just email a piece, 50 to 350 words to coronalife@the-braid.org