Inside Our Time: Corona Nuggets by Barbara Trainin Blank 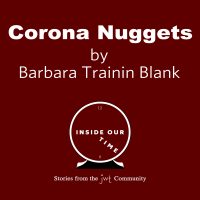 I’m going to die.  That’s the refrain that keeps going through my head, whenever the toll of the virus is announced.

Why the obsession?  Maybe it’s the suddenness of it all.  I know I’m going to die at some point, but it’s never been clearer that my age is an underlying condition.  Except about dementia and cancer.

Understood that we’re all expected to stay place, not venture out.  It’s easier, in a sense, on freelance workers.  We’re used to isolation.  And since Passover is upon us, maybe it’s apropos of the first one — when each family was commanded to sacrifice in its own home.

On the other hand, it’s lonely.  Why is no one checking on us?  Why am I the one who reaches out without much reciprocity?  Ironically, that which often bothers us and feels invasive — electronic media — is now comforting.  Without them, where would we be?

But as often as we speak to our recently married daughter in Israel, it won’t really compensate for the fact that our long-planned trip in May will most likely not take place.  Our other daughter lives nearby, but our little grandchildren are not supposed to hug us.

Our cats don’t understand much about electronic media — though many cartoons show frustrated pets not comprehending the devices their owners are glued to — but they seem to sense something is different.  They whine for food more often because I’m here.

That which is sometimes pleasant is now annoying.  Many a Shabbat I don’t feel like going to shul.  Being Orthodox, I have an “out” — not needed for a minyan.  But when our shul announced last Friday there would be no services, I felt bereaved.  But angry when other synagogues and Jewish institutions held them.

In fact, what could one say about the people everywhere who were asked to self-isolate and refused to comply?  What can one say about political leaders who don’t know how to lead?  Couldn’t our advanced country have been better prepared?  Maybe it’s not too late.

Thank you Barbara, for your story! “Inside Our Time” digital series: