Inside Our Time: A Saturday Ritual by Art Shulman 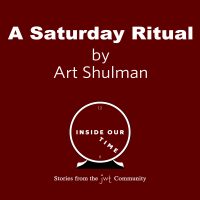 For years my wife and I followed a routine on Saturday mornings.  After a snuggle in bed first thing in the morning, we traipsed down the block to Millie’s, the local coffee shop, for breakfast.  The staff knew me so well that I didn’t even have to state my order.  They knew it was always – and I hate to say this on the JWT platform, but we Jews are of many different persuasions – bacon & eggs, hash browns, and wheat toast, all washed down by orange juice and coffee that needed to be refilled innumerable times.

But because of the coronavirus, Millie’s has been closed.  So, there went our ritual for a few weeks.

As the days piled up, with each day seeming like the next, I thought it might be a good idea to do something to distinguish between the days of the week.  Two days – Monday and Wednesday – were already differentiated.  Those were the days I taught classes, now online, at California State University, Northridge.

Then I had a brainstorm — why not continue with our Saturday breakfast ritual, with some necessary adjustments.  So, this past Saturday we prepared breakfast at home, trying to replicate the Millie’s eating experience as much as possible.  I say as much as possible because we had to accommodate reality.  My Millie’s eggs had been over easy, but I had no idea how to accomplish such a complicated task at home, and I insisted on cooking my own eggs.  I even cracked the eggs by myself, put the contents in a small bowl and whisked them with a fork.  (I think we have a whisk, but I have no idea where it is.)  So, the eggs were cooked scrambled.

We had no bacon in the fridge, but there was a small package of fake bacon there, purchased at some point by my vegan wife.  Unfortunately, when I opened the package the meat was moldy.  Perhaps the universe was telling me something about a Jew eating bacon, even if fake, on the Sabbath.

The potatoes were reheated from the roasted potatoes made the night before, with diced onion and red pepper, so they were more like country potatoes than hash browns.

The bread was cracked wheat rather than the blander wheat Millie’s served.  The orange juice was fine.  But the coffee wasn’t.  I had bought a large container of coffee from a convenience store the evening before and kept the container in the refrigerator, now reheating it.  Who knew that coffee could taste stale just fourteen hours after purchase?

At any rate, I now have three days of ‘special events’:  Mondays, Wednesdays, and Saturdays.  I’m working on ideas for Sundays, Tuesdays, Thursdays, and Fridays.

Thank you Art, for your story! “Inside Our Time” digital series: